“We Danced While They Bombed”: Popular Dancing in Britain during the Second World War 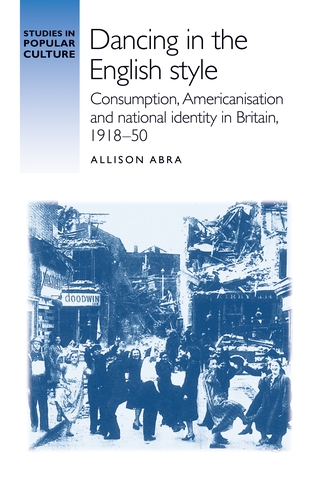 In the fall of 1939, during the first months of the Second World War, famed American war correspondent Edward R. Murrow undertook what he called an “investigation into London nightlife.” Describing a recent tour through some of the restaurants, hotels, and night-clubs in the city’s West End he observed that “business is good; has in fact improved since war came.” In particular Murrow noted that there were now more dance bands being featured than before the war, and that many establishments “where one could eat without musical distraction in the old days have now engaged small orchestras.” As Murrow summed it up, “Customers want to dance.”[1]

The war was in its infancy when Murrow wrote, but the phenomenon that he observed would endure until its conclusion, when Britons celebrated their victory by dancing in the streets on VE Day. Additionally, as I discuss in my recent book Dancing in the English Style: Consumption, Americanisation, and National Identity in Britain, 1918-50, throughout the war, dancing took on a host of important cultural meanings that helped the British people express who they were as a nation, and to define how and why they were fighting. 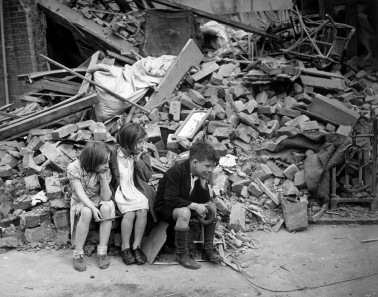 East London in the aftermath of the German Blitz of 1940-41.

From the moment the war broke out there was voracious press coverage of Britain’s “dancing boom.” As one dance magazine reported about London’s first and most famous dance hall, ‘It takes more than a war to empty [the] Hammersmith [Palais]… [it] is, in fact, doing better business than ever.”[2] From that point on, the British people’s desire to dance was frequently deployed as evidence of their high spirits, fortitude, and endurance. When the Blitz began, stories about dances carrying on during air raids were abundant. An illustrative report described the scene in a dance hall as German bombs rained down, observing that “the band … played on, and the dancers continued as though nothing had happened, although many of the windows had been blown out.’[3] Special attention was focused on the persistence of dancing in Dover, which suffered under both heavy bombing and enemy shelling across the English Channel from occupied France. A journalist marveled in 1942 that under such conditions the town still staged weekly dances, and that “One occasion saw the orchestra vie with German gunners as to which could make the most noise: dancers remained swaying to the rhythm of war and a ‘hot’ band! … [showing] the ‘carry on’ spirit of a town living under the shadow of German long-range artillery.”[4] Reports of this type helped to establish the belief in the “Blitz spirit,” and the British people’s stalwart refusal to succumb to Nazi aggression.

Dances were also frequently heralded for being spaces where social unity and “community feeling” were on vivid display. A letter to the editor of a dance magazine described his experience at a Manchester dance hall, where “before a few dances were over, I found quite happily that all the dancers were singing as well as dancing – in fact, it almost became community singing – and it really did help us all to feel more cheerful.[5] There was a belief that dances were a unifying force, bringing together people of different classes, from distinct regions within the British Isles and from across the British Empire, and cementing bonds between the British and their military allies, such as Poles or Americans.

Dance hall proprietors also sought ways to enable their patrons to make tangible contributions to the war effort during their visits, positioning dancing as not only a morale-booster but a way of doing one’s “bit.” In a notable example, the Manchester Ritz hosted a “Tank Week” in 1941, during the course of which a large inflatable tank was pushed around the ballroom, and as they danced across the floor patrons dropped coins upon its surface; by week’s end the hall had raised over fifty pounds towards the building of a new tank. Dancing therefore provided enjoyment and relaxation, but also enabled Britons to feel that even in their leisure time they were contributing to the country’s victory in the war.

Meanwhile, with growing restrictions on dancing in Nazi Germany and across occupied Europe, the British saw their very ability to dance as something that distinguished them from the enemy, and reinforced their reasons for fighting. As one writer opined in 1944, in “dictator-occupied countries… force rules and freedom goes and with it dancing which so truly expresses a freedom of spirit and action that is distasteful to rulers and conquerors.’[6] The dance craze in Britain thus came to represent the nation’s continued freedom from tyranny, and the people’s dancing bodies became a physical expression of their enduring democracy.

It is important to note that this vision of the dancing nation – cheerful, defiant, and united – shrouded lingering social tensions, on the dance floor and beyond. While it was a predominant belief during the so-called “people’s war” that shared sacrifices and the collective waging of the war effort were dissolving social divisions of class, gender, race, age and region, historians have clearly demonstrated that many societal fissures were exacerbated rather than eliminated during the war years.[7] This was no less true of the dance floor, where, for instance, controversies over interracial dancing sparked significant tensions or even violence. Even the much vaunted dance craze was to some degree illusory. For all the times that dances continued during air raids, there were other occasions when they simply shut down; attendance at leisure venues also declined significantly during moments when the military situation appeared particularly grim, such as during the German offensive in 1940, when, as one contemporary put it, “the mood of the people is not to go out nearly so much at night to make whoopee in the West End.”[8]

Yet even with these necessary caveats, dancing undoubtedly played a critical role in constructing and presenting – within Britain and around the world – the dominant image of the fighting nation, and the ideals upon which it waged the war. Indeed, I argue in the book that for all of the ways that the “people’s war” was a myth, the dance floor provided a space where that myth could be realized and experienced by wartime Britons, even if only in the ephemeral “moment of dance.”[9] Dancing in World War II Britain thus has much to tell us about the role played by popular culture in wartime, and how it operates not solely as escapism or propaganda, but as a crucial site for the creation and expression of soldiers’ and civilians’ motivations and belief systems.

Allison Abra is a faculty fellow in the Dale Center for the Study of War & Society and the Nina Bell Suggs Professor at the University of Southern Mississippi. A specialist in modern British history, she is the author of Dancing in the English Style: Consumption, Americanisation, and National Identity in Britain, 1918-50 (Manchester, 2017).

Heather Marie Stur, Ph.D., is associate professor of history at the University of Southern Mississippi and a faculty fellow in the Dale Center for the Study of War & Society. She writes and teaches about U.S. foreign relations, gender and war, the Vietnam War, and 20th century war and militarization in a global context. She is the author of Beyond Combat: Women and Gender in the Vietnam War Era (Cambridge 2011). Dr. Stur spent the 2013-14 academic year as a Fulbright scholar in Vietnam, where she was a visiting professor on the Faculty of International Relations at the University of Social Sciences and Humanities in Ho Chi Minh City.
View all posts by Heather Stur →
This entry was posted in Military history, Popular Culture, war and society, World War II and tagged Blitz, Britain, dancing, leisure. Bookmark the permalink.